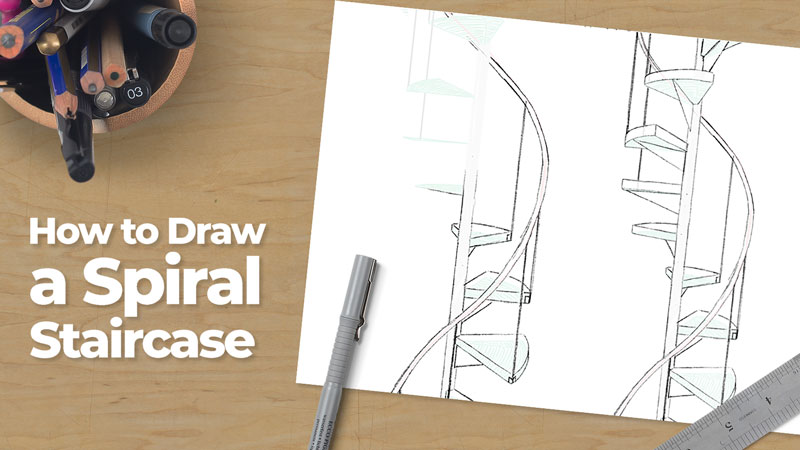 As an art teacher, one of my favorite things to teach is linear perspective. For those not familiar with linear perspective, it is a system of drawing used to create spatially accurate relationships between forms (objects) and their environment. Linear perspective makes use of dots (called vanishing points) along an established eye-level. See the illustration below. 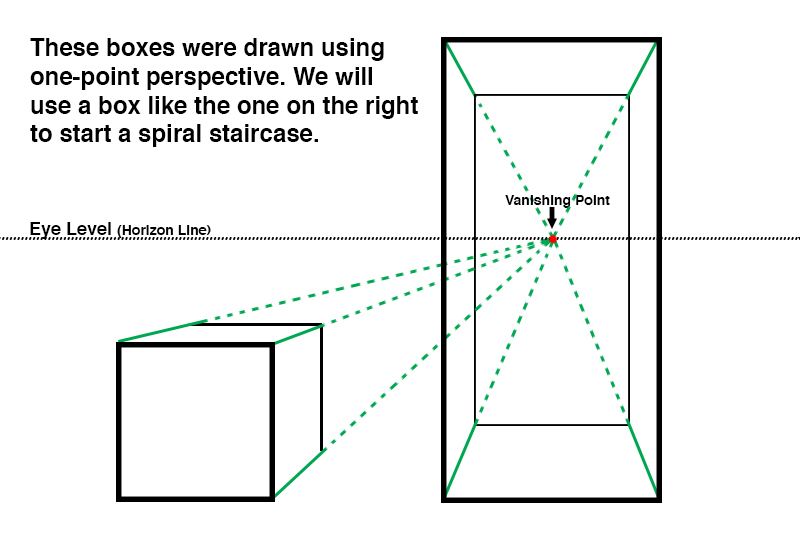 To draw most objects, one starts with either a flat rectangular plane or an actual rectilinear form, i.e., a box. Usually, at the scholastic level, most perspective projects reinforce the basic rules of linear perspective by using subject matter that remains box-like. Examples include city buildings, houses, interior spaces (rooms) and standard stair steps. Often, drawing stairs represents the height of complexity achieved in an introductory linear perspective project.

Of course, when using linear perspective, one can draw anything, even curvy things. Sometimes, while helping my students draw the aforementioned buildings and interior space, someone will invariably ask “How do I draw a spiral staircase?”. Such are the questions that art teachers love to hear. Nothing is more exciting that working through a drawing problem with an eager mind.

The following tutorial demonstrates how to draw a spiral staircase. As you might have guessed, we’ll start with a box.

Before we begin drawing the staircase, study the illustration below. 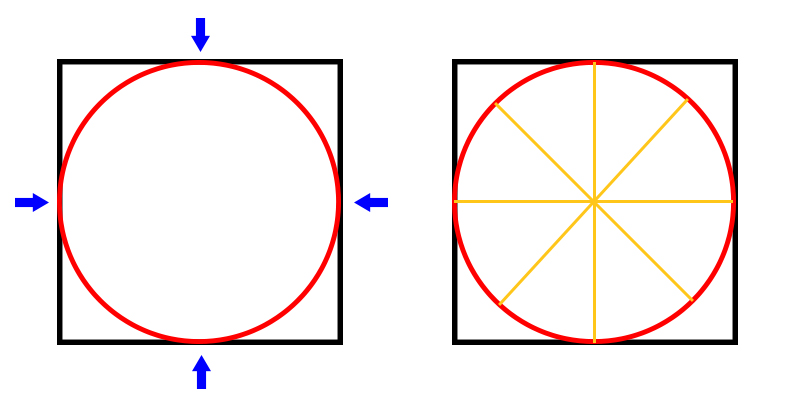 The two bullet points above are fundamental to drawing a spiral staircase. Let’s begin.

Step One – Draw a Box

Note: The following drawing was created on a tablet using Procreate. One can use a pencil and paper to complete the tutorial just as well. Drawing on the tablet simply makes the tutorial easier to understand. I used different color lines for each steps. In your own drawing, you should draw very lightly since most of the first few steps will eventually be erased. 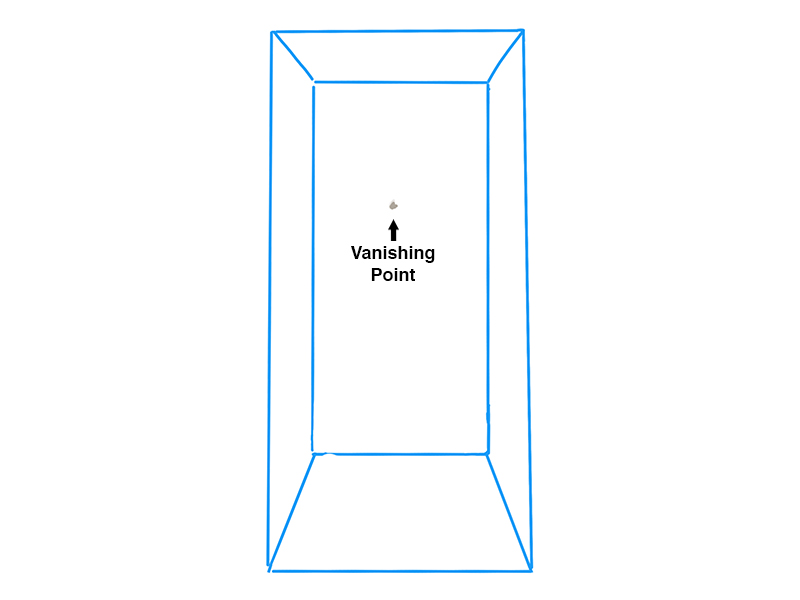 Create a series of lines across the front of your box. The spacing of these lines determine the spacing between your steps, so be sure the distances between these lines are consistent.

Now, using the vanishing point, make a flat horizontal plane from each of the horizontal lines. Your drawing should look a bit like a book case. 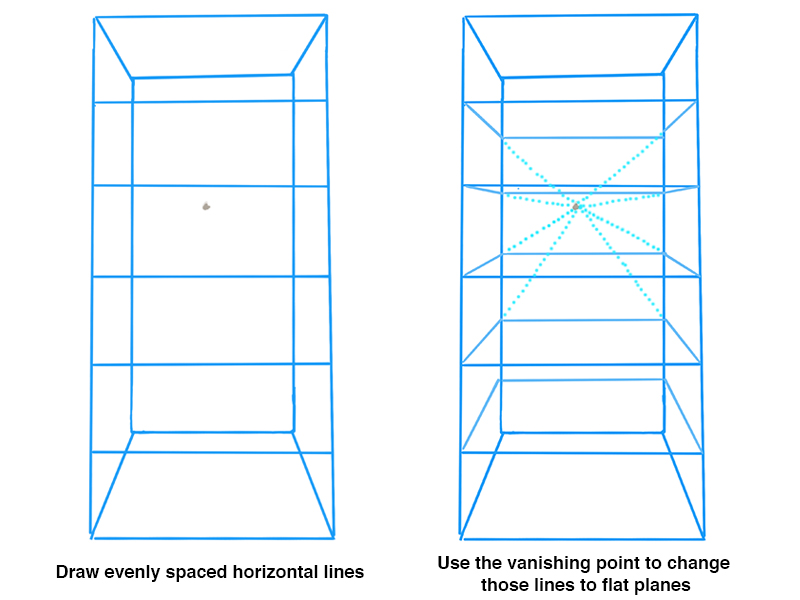 Need help drawing ellipses? How to Draw an Ellipse

Only a small segment of each of these ellipses will later become part of a step. You will have a chance to refine these curves edges later in the drawing.

Beginning at the corners, draw an “X” through each of the horizontal planes. Doing so pin-points the center of each plane. Now we can draw a long vertical line through these center points, creating an axis for our steps to rotate around.

Later, we’ll thicken this line so that it looks like a substantial support capable of bearing weight. 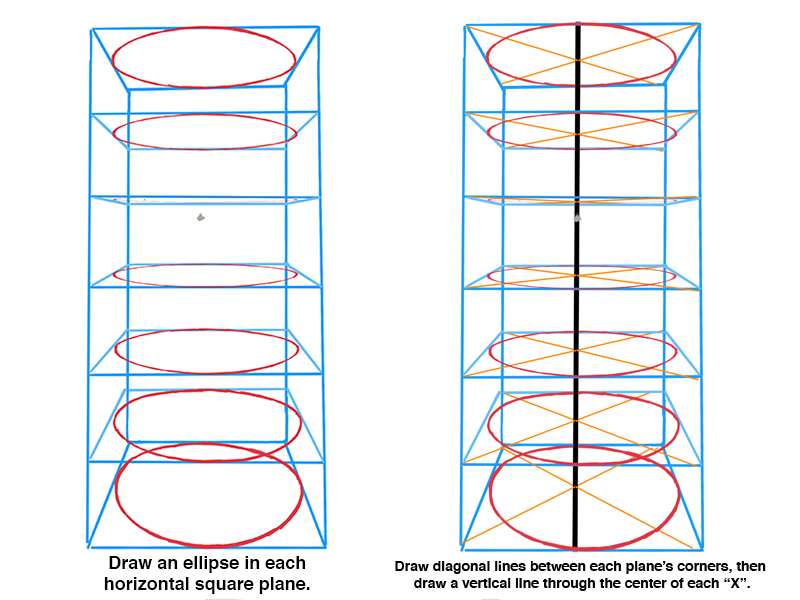 Divide one quarter of each ellipse in half. Shade in one of those halves. They should look like pizza slices.

Notice the pattern these triangular shapes follow as they rotate vertically around the axis of our staircase.

Let’s clean up our drawing some. Erase the original box now. It is no longer useful.

At this point in my own drawing, I felt as though the steps were too small when compared to the spacing between them, so I lengthened the two straight edges of each step and simply drew a new curved line for the end of each step, making sure that the new curved edge matched the degree of curvature of the original edge/ellipse. 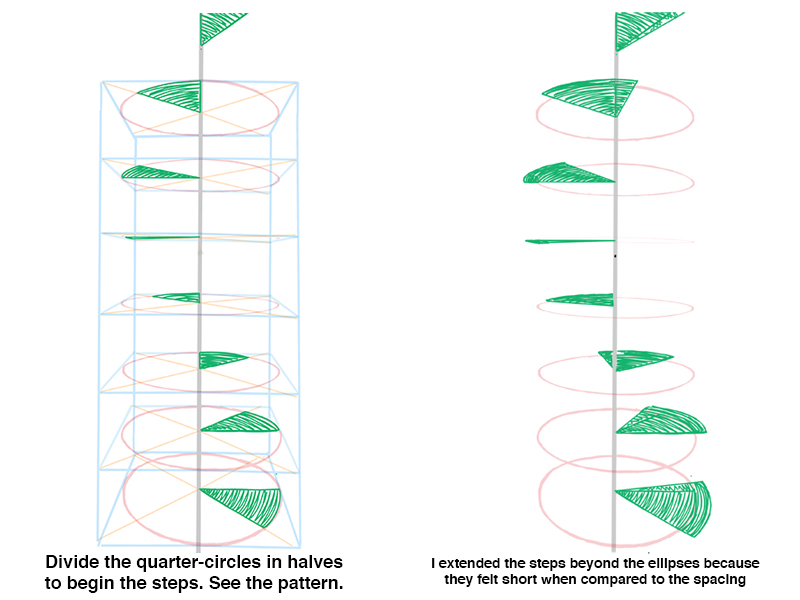 Every staircase needs a banister. On each stair step, draw a straight line upward. Place these lines on corresponding corners. Make sure these lines are equal in length.

Now connect the tips if these vertical lines with a smoothly curving line. The banister-line should mimic the turning of the stairs as long as the vertical lines are equal in length. 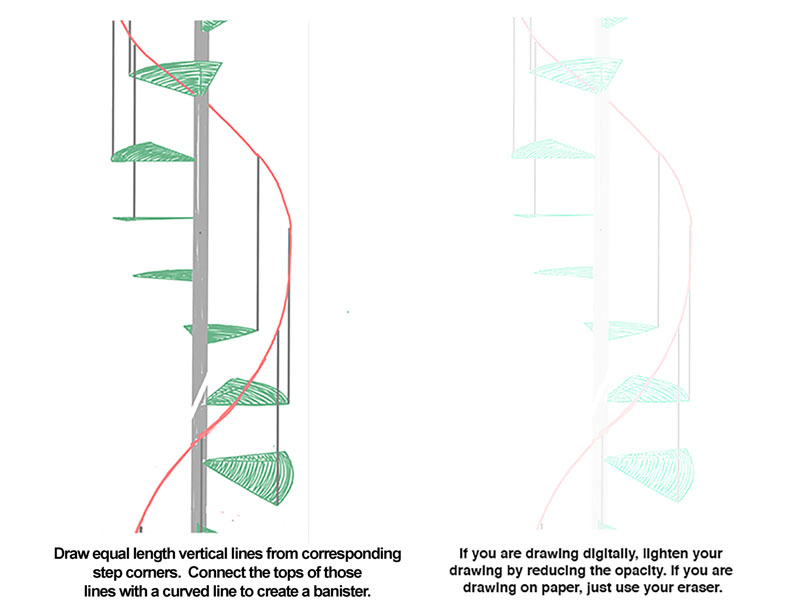 Step Six – Give Your Steps Some Form

The skeleton of our staircase is in place. The hard work is done. It’s time to give our stairs some bulk.

Widen the vertical axis to give it some width. Now it is a pole.

Also, change the flat, 2D steps into 3D forms by drawing short vertical lines upward from each corner and repeating the shape of each step at the top of those short lines (see the illustration below for clarification).

For believability’s sake, I added a support under each step by imagining a center point along the support pole between each pair of steps. From those center points, I drew a line towards the approximate center of each step’s curved edge. 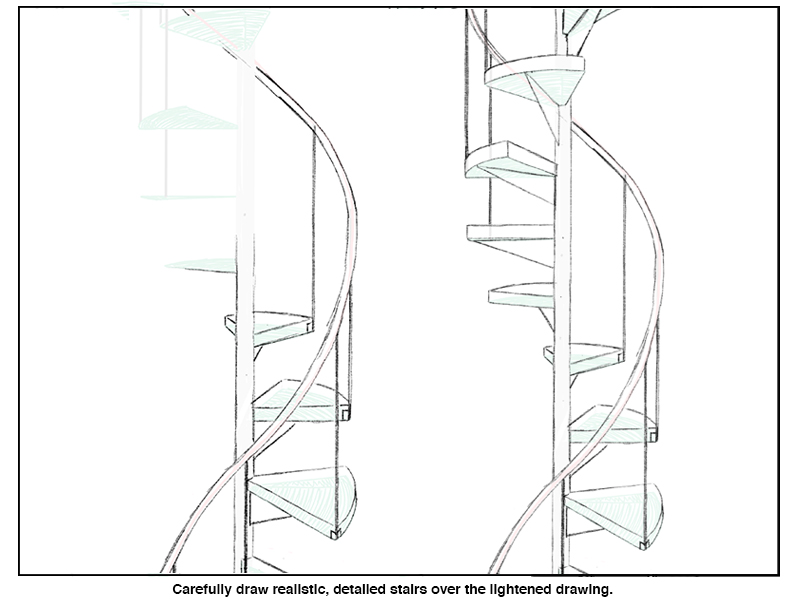 When we use linear perspective, we’re using our imagination. To complete the stairs, whether they just are part of a larger composition of just a stand-alone exercise like my own drawing, we need to add value.

To create value, we will need a light source. Can you tell where the light is coming from on the completed staircase below? 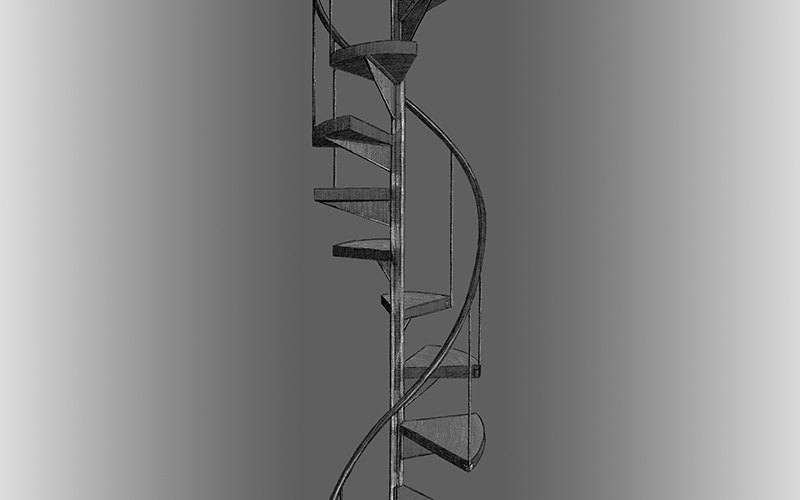 If you guessed that the light is from the top right, you are correct. Be sure to shade the steps according to a fixed light source instead of shading each stair exactly the same.

Unlike a standard staircase, each step in a spiral staircase is oriented in a different direction than those immediately above or below itself.

Congratulations. You have completed the spiral staircase tutorial. Remember, all round and curvy objects are drawable using linear perspective. Just start with a box. 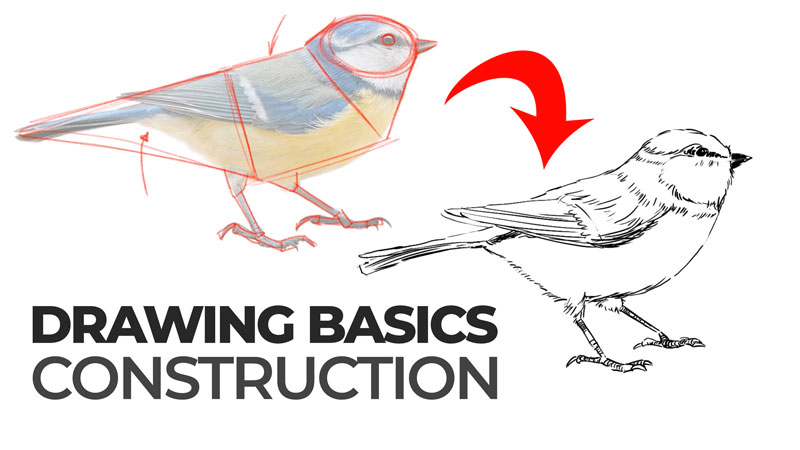 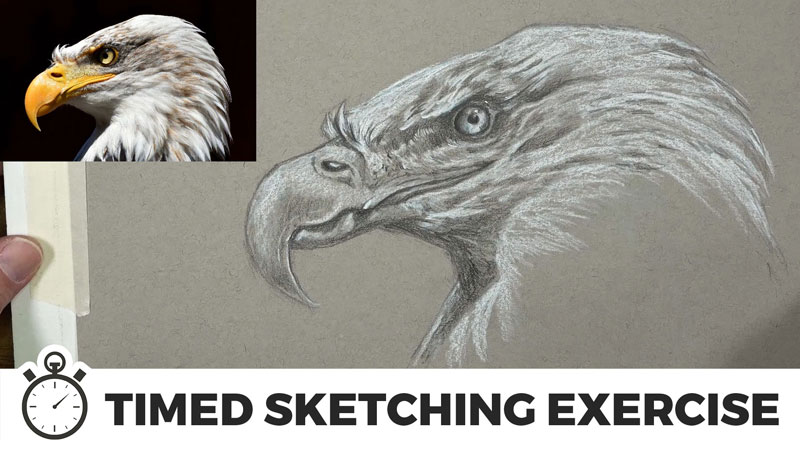 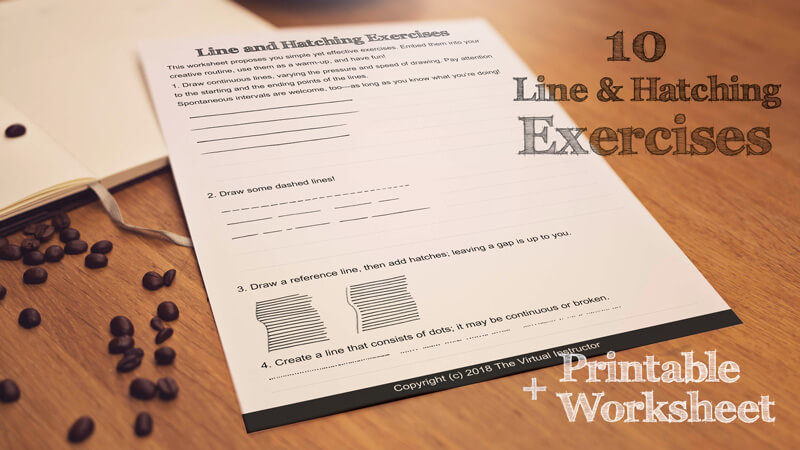 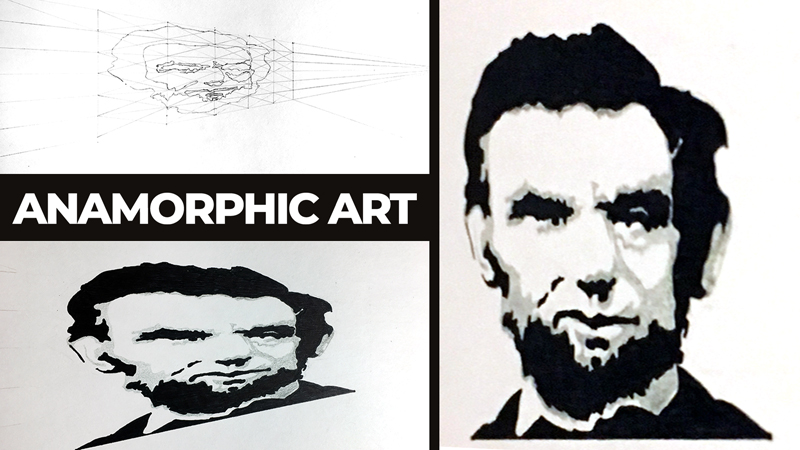