Think drawing cars is difficult? Well, any man-made object with curves and details isn’t a “walk in the park”. Ironically, if we loosen up with our initial marks and focus on relationships of lines and shapes, a complex object (like a VW Beetle) is quite a bit more manageable to draw. In this timed drawing exercise, Ashley demonstrates this concept as he completes a drawing of the classic car in just 45 minutes with graphite pencil.

Here’s a look at the completed image… 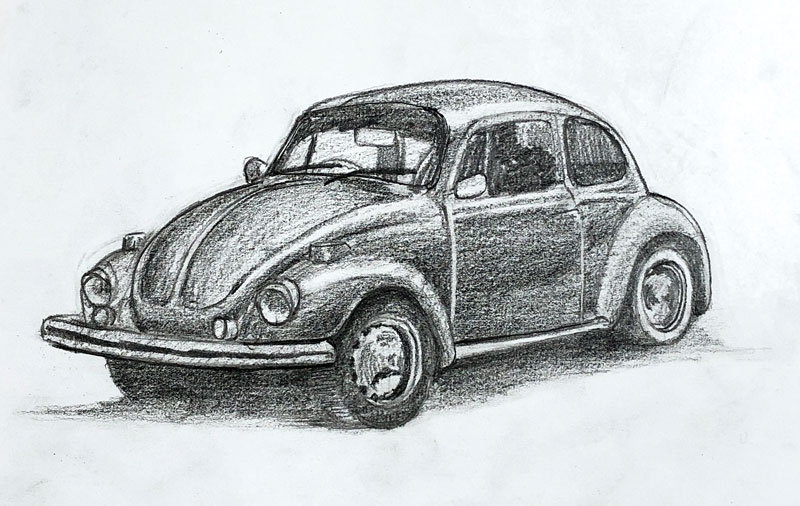 Mapping the Drawing with Shapes and Lines

Every drawing that we create is a series of decisions. Where should we place this mark? What should this shape be? How does this section relate to the one beside it?

Our drawing develops as we make these decisions, which are followed by the actual marks. The decisions that we make early in the drawing process are often the most critical.

This doesn’t mean that these early marks must be remarkably accurate. This is because many of the decisions we make are based on relationships and comparisons. Many times, we can’t make an informed decision on a specific mark without having a mark in place. With two marks or three or so on, we have more information for comparisons and as a result – our drawing becomes more and more accurate.

In the beginning stages of this drawing, marks are made quickly and loosely.

Ashley starts with a line to define the bottom edge of the car. This initial line establishes the approximate length and angle of the Beetle. From there, the angle of the front of the car is established, but only after comparing its length and slant to the first line. Then a line is drawn, parallel to the first, for the height of the door. This is followed by an additional parallel line for the height of the car.

These four simple lines become the foundation for the drawing that follows.

Without the first line, the three that follow cannot be added with accuracy. So the drawing builds from here. Each line that is added – each shape that is drawn – becomes a measurement and comparison tool. Adjustments are made and the drawing slowly develops with a remarkable level of accuracy.

VIEW COURSE
This approach to drawing is clearly different from concentrating on the contour lines at the start. Most beginners think that the outlines are most important and try to capture these contours first. This approach is painfully slower and usually far less accurate.

So as you can see, we need to be focused on getting information on the drawing surface that will help us make comparisons as quickly as possible. This may come in the form of basic shapes, loose lines, or more controlled lines like the ones Ashley drew as the drawing begins.

Once these initial lines are in place, the focus turns to drawing the body of the VW Beetle. We all know, and can clearly see, that a VW Beetle is a curvy car. But Ashley doesn’t jump straight to drawing curves. Instead, he continues with straight lines to define the outer boundaries of the vehicle. Why is this?

By drawing straight lines, Ashley is able to find the outer edges without being distracted by drawing challenging curves. These curved lines can be drawn once the basic shape of the car is defined. This leads to an even greater level of accuracy in the drawing. Angles are always important in accuracy.

VIEW COURSE
For even greater accuracy, Ashley uses his pencil as a measuring tool. By holding the pencil up to his reference (on an iPad off camera), he’s able to make additional comparisons. These additional comparisons allow him to focus on the details such as the location of the door, wheels and tires, etc.

Most of the time was spent finding and drawing the basic shape and contours of the VW. The values were quickly added at the end of the timed session. Although the values were developed with quick shading, the car still reads rather well. This is mostly because a full range of value with a consistent light source is developed.

See Also: The Basics of Shading with a Pencil

This drawing was created by observing a photo reference. This photo is from Pixabay.com. However, it was edited to make it more suitable for drawing. The image was originally in color, but the color was removed to leave it in gray scale. This makes it easier to see the values. It was also flipped horizontally, making it easier to “read” from left to right. 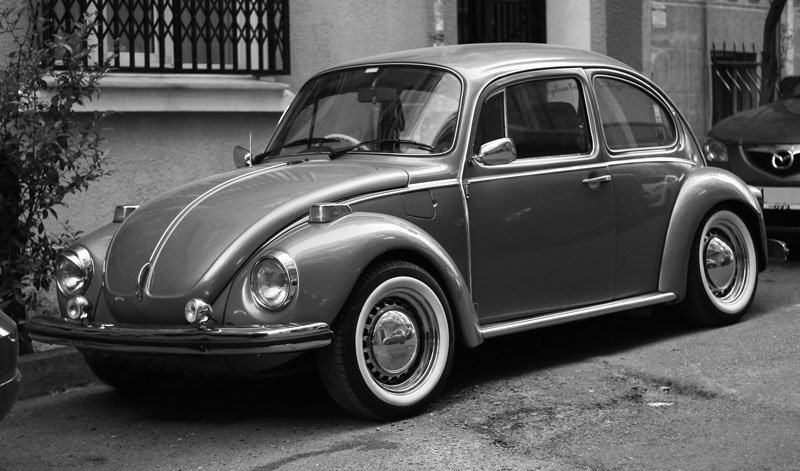 Materials Used to Create the Drawing

This drawing was created using very basic drawing materials. A few graphite pencils (HB, 3B, and 8B) and standard 80 lb. drawing paper was used. A simple, pink rubber eraser was used for corrections.

Although this drawing was created in a loose, sketchy manner and in just 45 minutes – there’s lots to learn here. Drawing is not just about making marks. It’s about making informed decisions that build upon prior decisions. These decisions begin with observation and end with marks. And part of being accurate with a drawing is the willingness to make marks that may not be “right” so that you can compare and alter in order to “find” accuracy. 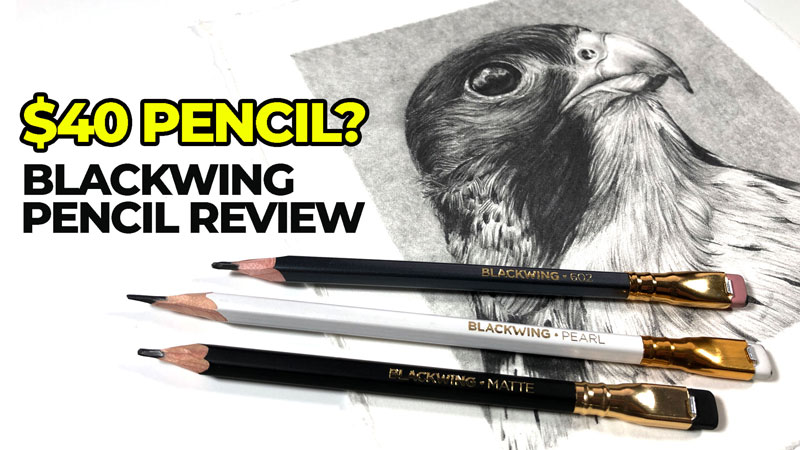 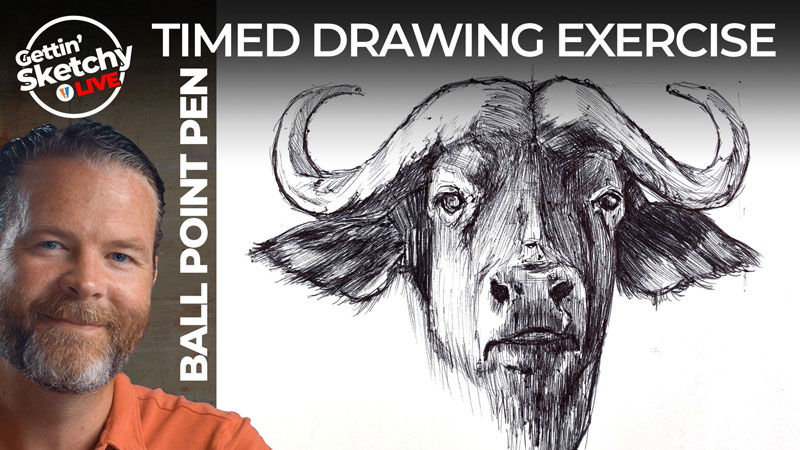 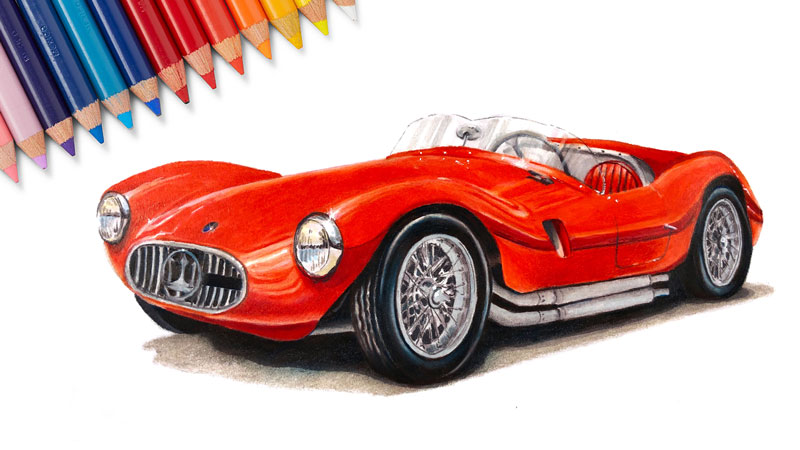 How to Draw a Sports Car with Markers and Colored Pencils 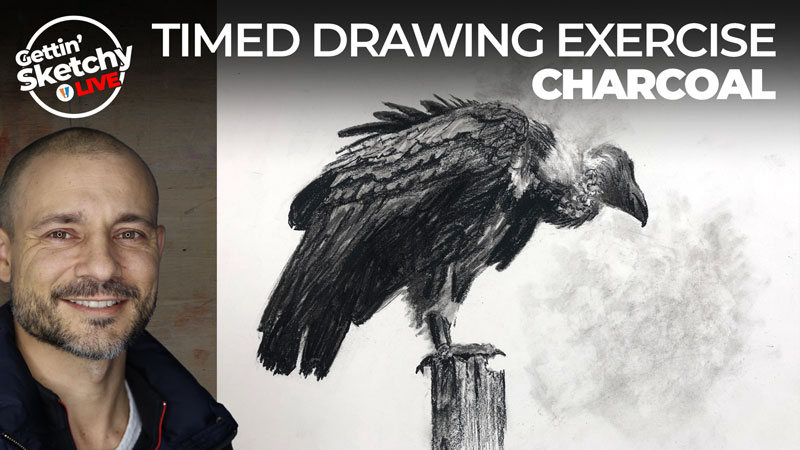 How to Draw a Vulture with Charcoal