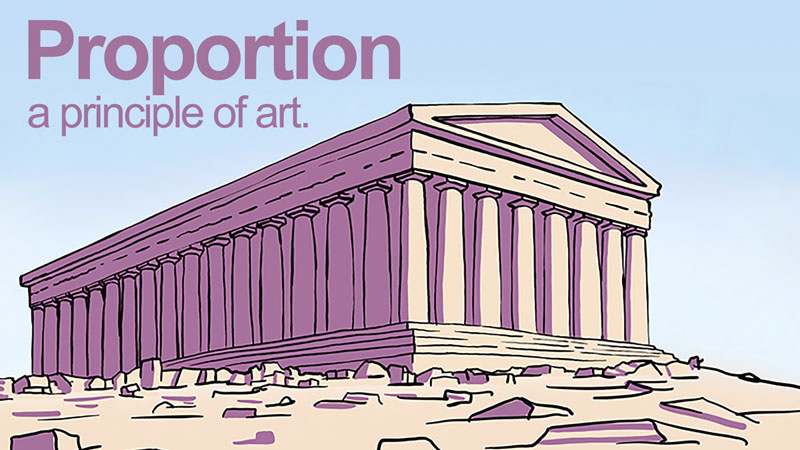 Proportion is largely about the relationship of the size of one element when compared to another. When drawing or painting realistically, proportion is important. If the proportions are incorrect, then the resulting image will look less realistic or abstracted.

Alternatively, artists can use proportion for effect. By manipulating proportion, the artist can make his/her subject seem strong, weak, funny, mysterious, etc. We can exaggerate proportions to emphasize a meaning or an element within the scene. For example, a caricature artist distorts proportion in order to create a stylized image of the subject.

Before going forward, let’s define proportion as it deals with visual art. Proportion does not refer to overall size, but rather the relationship of the sizes of two or more subjects or elements. In art, the size of an element is referred to as scale. For example, a basketball and a baseball are different in scale but share the same in proportion. 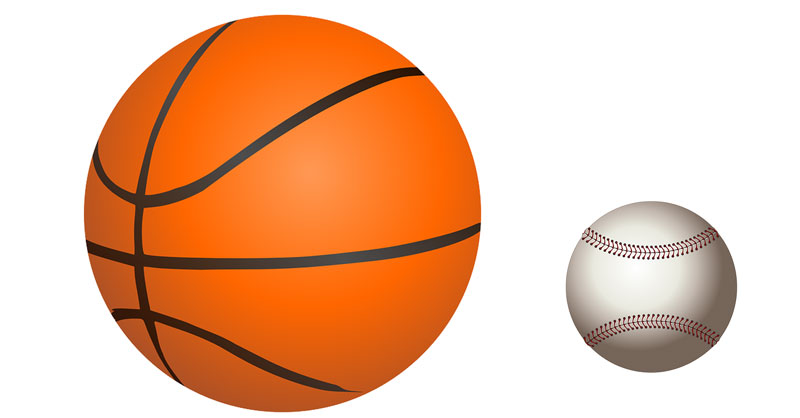 For a millennia, artists have sought the most aesthetically pleasing way to arrange visual components in a composition. From two-dimensional artwork to architecture, artists look for proportions (ratios) that please the eye. One popular concept was discovered by the ancient Greek mathematician, Euclid. He called this ratio the Golden Mean (The ratio expressed in numbers: 1.6180:1). 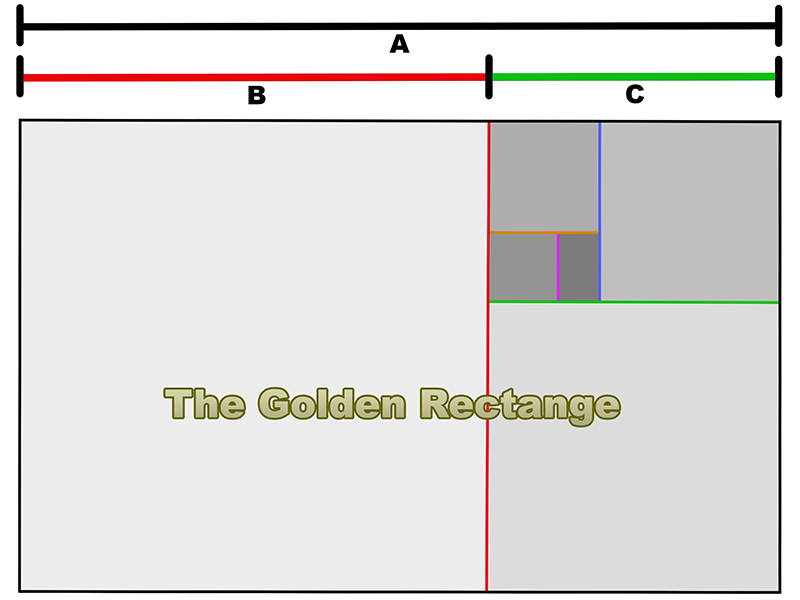 Euclid also applied this ratio to a shape and called it the golden rectangle. The process of dividing the rectangle by the Golden Mean is infinitely repeatable as the illustration demonstrates. 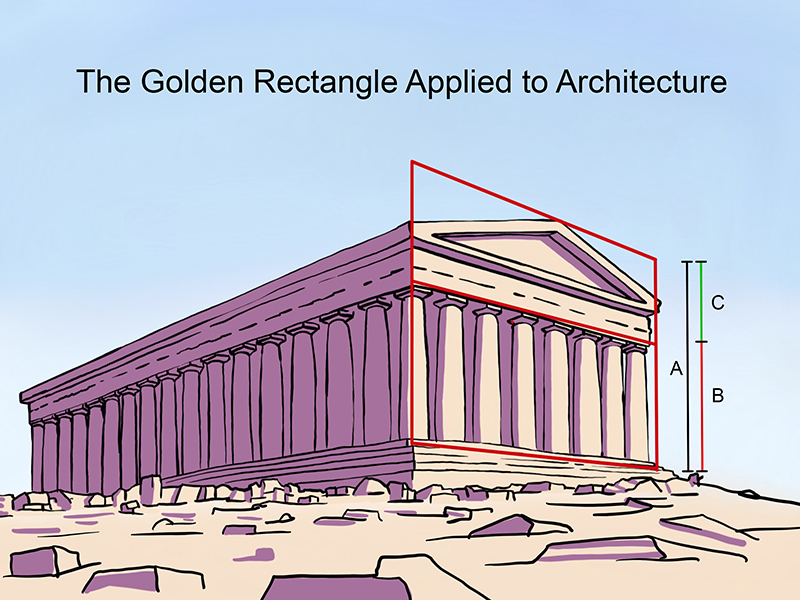 Artists have used the Golden Mean to help them make decisions about the the placement of important visual elements – not only in paintings – but also to direct the size and spacing of architectural elements.

We can use the Golden Mean to create visually pleasing artwork by placing important subjects based on the ratio in our art.

The Golden Mean appears in nature as well. In the first century, a Roman architect named Vitruvius studied proportion. He believed that the human body was aesthetically, the best example of proportion. He applied human proportions to his own architectural designs.

Building on the concept of a universally aesthetic proportion, Leonard Da Vinci attempted to illustrate the ideal human proportions laid out by Vitruvius centuries before. He called this the “Vitruvian Man”. 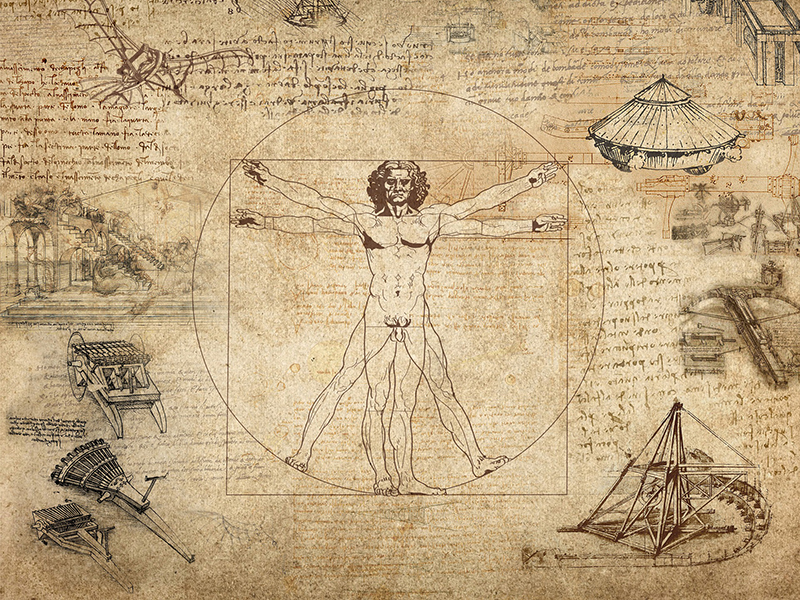 At the time, artists believed that if a perfect proportion were discovered and used, then their art would enjoy a special advantage and lead to certain success.

Proportions of the Human Body

There may or may not be an “ideal” human proportion. Realistic human proportions fall within a narrow range. That range accounts for the variety of observable body types. To be sure, lengths of arms, legs, and torsos may vary greatly but proportional variations are slight. A short individual has short arms and legs while a tall individual has long arms and legs. The arm length to leg length ratio is nearly the same for both persons, even though one is tall and one is short.

In art, we talk about human proportions in relation to the head. The variance in body size is greater than the variance in head size among humans. The average “height to head” ratio for humans is seven and a half to one. This means that the height of a person’s head divides into their overall height 7.5 times on average.

What are your proportions? Measure your head from the top to the chin then divide that measurement into your overall height. For example, I am 68 inches tall and my head is 9 inches tall. 68 divided by 9 is about 7.5. I am 7.5 heads tall, the average human proportion. 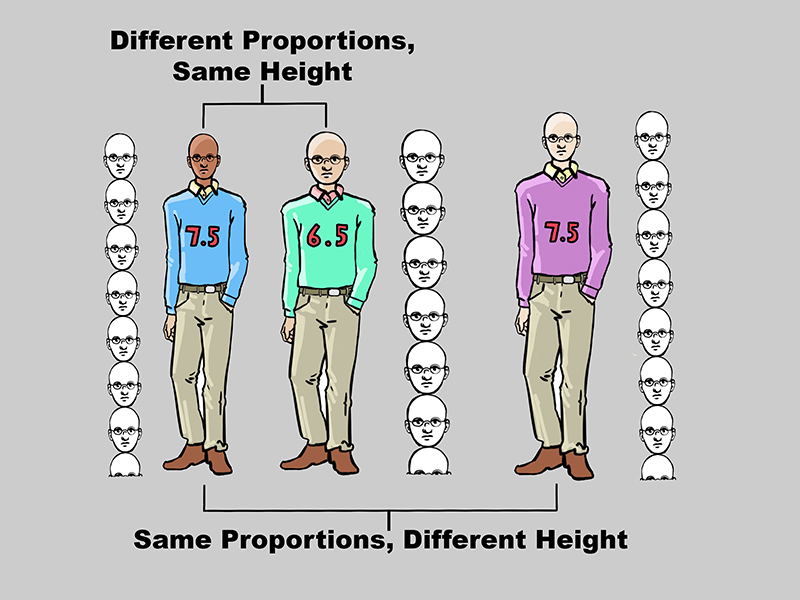 Proportions of the Human Face 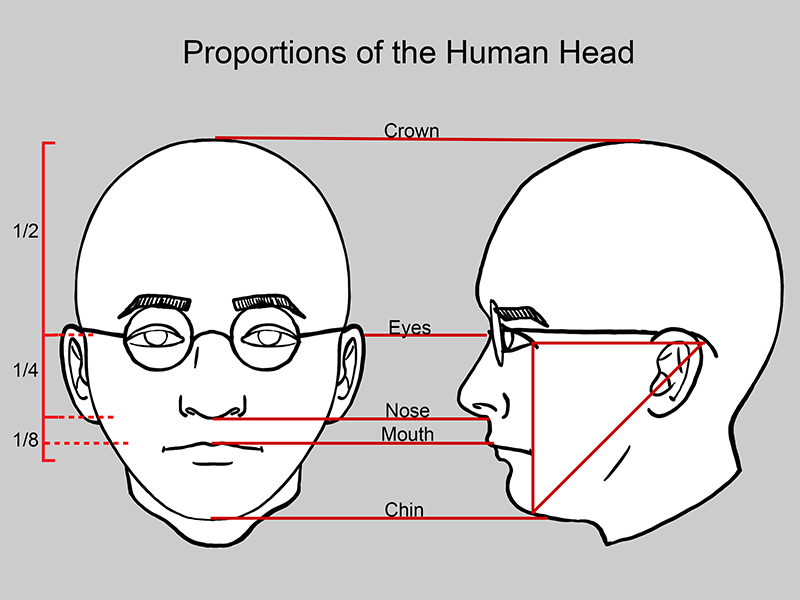 See Also: How to Draw a Face – The Basic Proportions of the Head

Sometimes exaggerated or distorted proportions are purposefully used to convey a particular meaning or message. By widening, lengthening, shrinking, and bending parts of the human body, the artist can create a feeling or mood around the subject. Let’s consider two historically acclaimed artists and their respective styles – El Greco and Picasso.

Born in Greece, El Greco lived and worked in Spain. A large portion of his artworks are religious in nature. He chose to exaggerate the human figure in nearly all of his paintings. His method of exaggeration was elongation. El Greco felt that by “stretching” the human form, he was directing his audience to look upward and to think about God. His figures certainly stretched toward Heaven. Also, by elongating his subjects, El Greco lent them an otherworldly, spiritual sense of being. 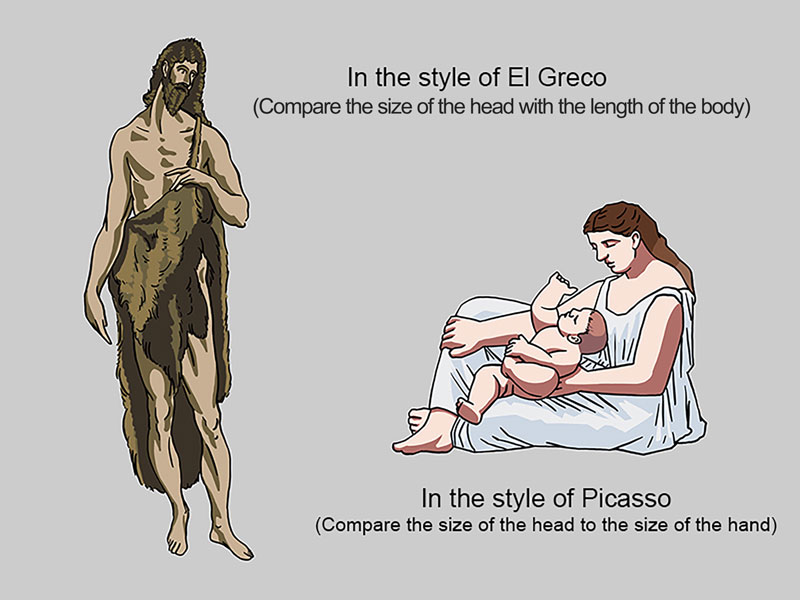 Picasso, also from Spain, worked in and pioneered several styles. In the early 1920s, he made a series of paintings about the relationship between a mother and her child. In this series, figures are thick and heavy looking. Picasso exaggerated the width of the body in comparison to the head, giving his figures a stable, sculptural feeling. This stable feeling communicates a secure, unshakable relationship between a mother and her child – the type of relationship he hoped his children would have with their own mother.

As artists, we can choose to use color or not. We can choose to use emphasis or not. There is, however, no escaping proportion. One simply cannot “leave it out”. Proportion is an important tool for the artist. With accurate proportions, we can create drawings and paintings that are realistic. By manipulating proportion, we can emphasize elements and communicate ideas. Proportion is a powerful principle that should be understood by every artist. 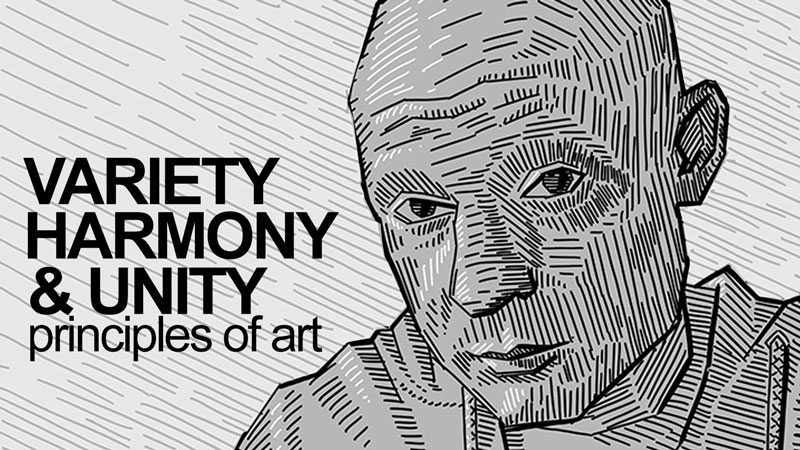 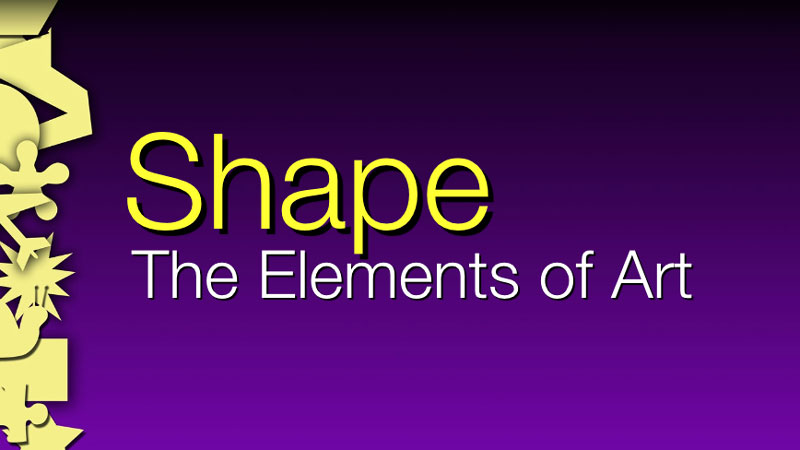