Color is such a vast subject. Because it is so vast, it can cause confusion for some. It doesn’t help that some manufacturers of art materials name colors in a manner that makes things more complex than it should be.

I receive many questions about color theory in general and with good reason. There is a lot of confusing information out there. Color theory, however, is not as complex as it may seem. It is actually quite simple if we understand colors as simple hues rather than pigments.

Let’s first look at the color wheel and identify the “warm” colors and the “cool” colors. Perhaps you’re already familiar with warm and cool colors, but if not, let’s review.

The color wheel is the color spectrum bent into a circle. Certain color relationships occur as a result of this bending. 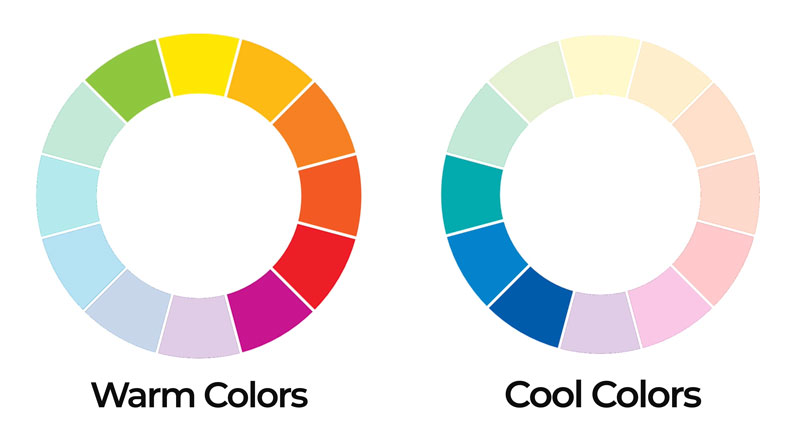 Cool colors are colors that we associate with things that are cold. For example, ice and snow is cold and the color of the shadows found in ice or snow is blue. Therefore, blue is a cool color.

This concept is referred to as color temperature. 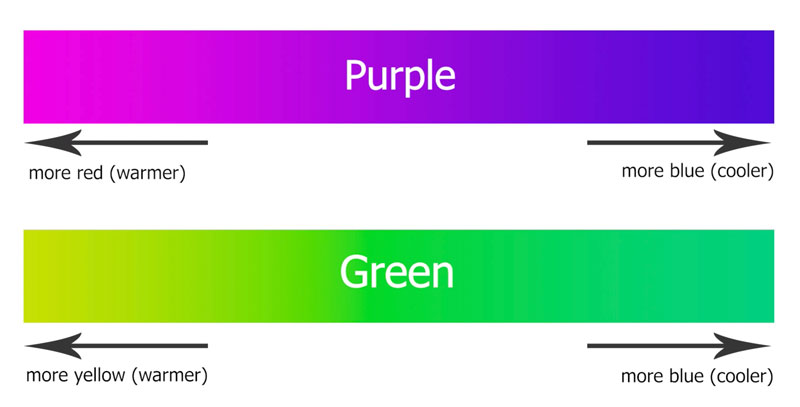 Ok, now that we’ve got that out of the way, let’s next look at how this information ties in with the color gray.

Gray is considered a neutral color. But as you’ll see in a moment – it may not be a neutral as you expect. Neutral colors are not found on the color wheel. Other neutral colors include black, white, and some browns (although most browns lean towards a color such as orange.)

Gray is mixed by combining white and black. White is not mixed – it is absolutely pure. But many blacks are mixed or can be mixed and this is how we manipulate the gray that is produced. The key is in the black.

How Black is Mixed

Black is a strong color. It is so strong that many artists decide to mix their own. By mixing a black, we have control over the color temperature and also the intensity. This often leads to a more natural looking black that doesn’t overpower an image.

Black is most easily mixed by combining a blue with a brown. Darker browns and darker blues clearly work the best.

If you mix a black with a heavier concentration of blue, the result is a cooler black.

If you mix a black with a heavier concentration of brown, the result is warmer black.

Blue is clearly a cool color, while brown leans towards orange – a warm color. Brown can almost be considered as a dark value (shade) of orange.

Now, if we mix the cooler black with white, the result is – you guessed it – a cooler gray.

If we mix the warmer black with white, the result is a warmer gray.

You can create a whole multitude of grays by using various pigments of blue and brown and mixing that mixture with white. Here’s a look at several different grays based on their color temperature…

This works with any medium that you choose to work with. Here’s a look at warm and cool grays mixed with watercolor. 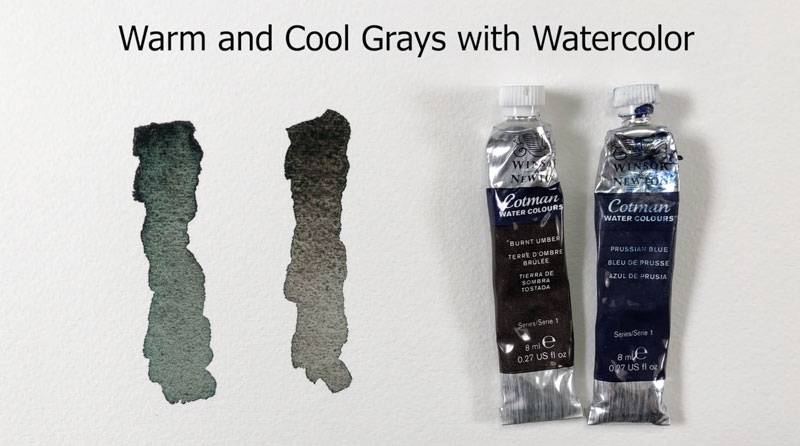 In the second example, Burnt Umber dominates the mixture, resulting in a warmer gray.

Here’s a look at warm and cool grays mixed with pastels. In this case, a darker blue is layered over a darker brown. This mixture is gently blended before layering a light layer of white over the top. The result is a cool gray. 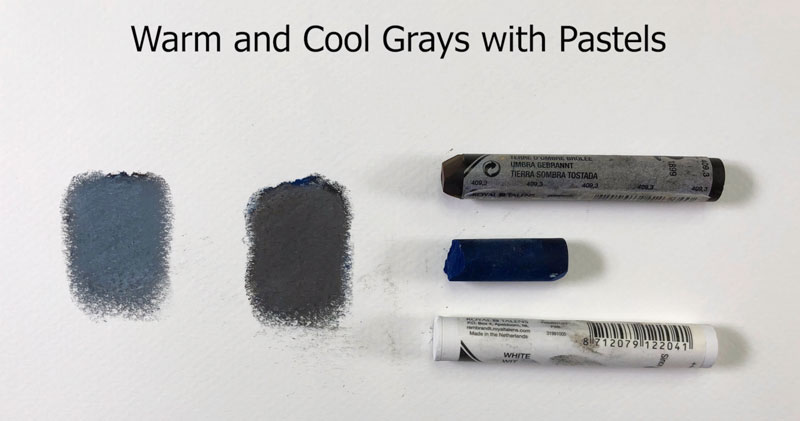 In the second example, the darker brown is layered over the dark blue, blended, and then layered over with a light application of white. The result is a warm gray.

Intensities of Warm and Cool Grays

Some colored pencil manufacturers, like Prismacolor, produce gray colored pencils of warm and cool varieties of various intensities. They also do this with their markers. The intensity of the gray is expressed as a percentage.

Here are the cool grays that Prismacolor produces…

They also produce the same intensities of grays as warm grays as well.

Here’s a comparison of some of the cool grays…

As you can see, the intensity of the gray increases based on the percentage designated.

When to use Warm and Cool Grays

Grays can clearly be combined within an image. For example, both warm and cool grays were used in this colored pencil drawing of an elephant… 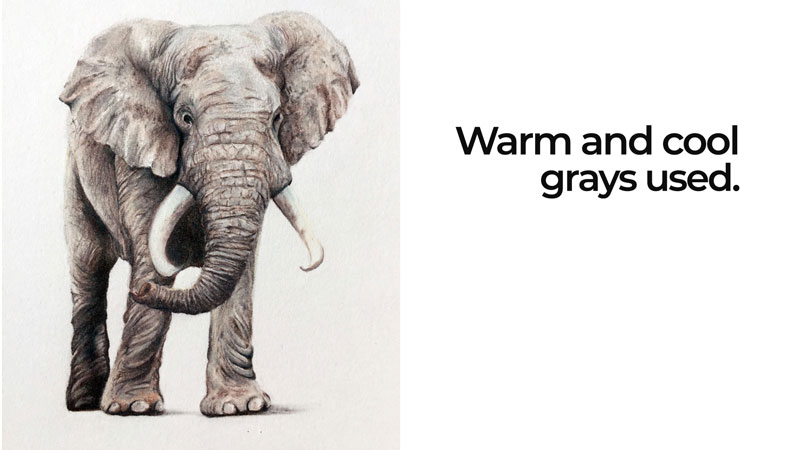 Want to see how it’s done? How to Draw an Elephant with Colored Pencils.

Sometimes, it makes more sense to use a cooler gray for shadows. In this colored pencil drawing of a frog, warm grays were used on the body, but cool grays were used for the cast shadow underneath. This simply creates more contrast between the subject and its cast shadow. 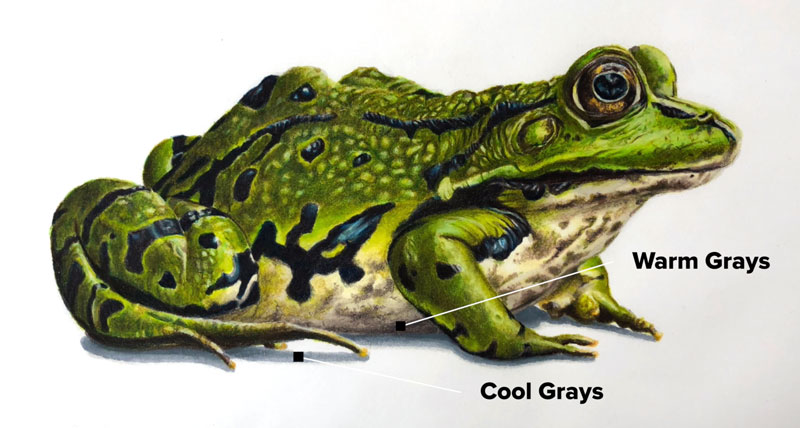 Want to see how it’s done? How to Draw a Frog with Colored Pencils (Membership required).

So now you hopefully understand the difference between warm and cool grays and have a better idea of when it’s appropriate to use them. Remember, don’t overthink things too much. If it feels right for your image – it probably is. Have fun, be creative, and just make art. 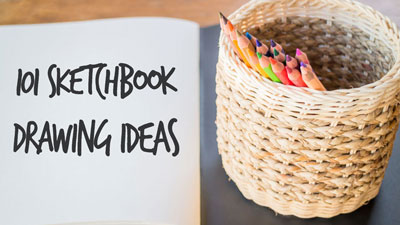 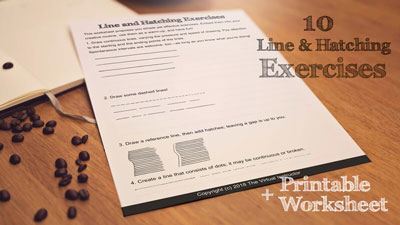 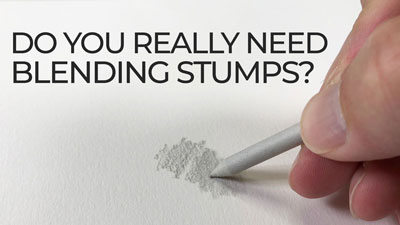